We regretfully announce the passing of Severson & Werson founder James B. Werson.

On December 29, 2016 James Werson celebrated his 100th birthday surrounded by his family and friends. He passed on thirteen short days later on January 11, 2017. We and everyone who knew Jim are celebrating and honoring Jim’s life. People describe Mr. Werson as one of the most accomplished men they have ever known. Mr. Werson graduated from the University of California in 1938 and Berkeley Law in 1942. During his time at Cal, Jim was an All-American swimmer for Cal Athletics and later inducted into the Cal Athletics Hall of Fame. He also swam for the U.S. National team. In 1946, after serving as an FBI agent during World War II in New Jersey, Massachusetts, and Illinois, Mr. Werson joined Walter Severson and a few others in creating the Firm that has become Severson & Werson. He was very proud of the Firm’s people and success until his final day.

Due to the leadership and values of Mr. Werson, Severson & Werson celebrates over 70 years in business and has over 1700 combined years of experience among its’ current attorneys. Through Mr. Werson’s role model and expectations, the Firm prides itself on the relationships our attorneys have created with our clients and the expertise and value we deliver. 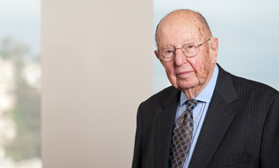